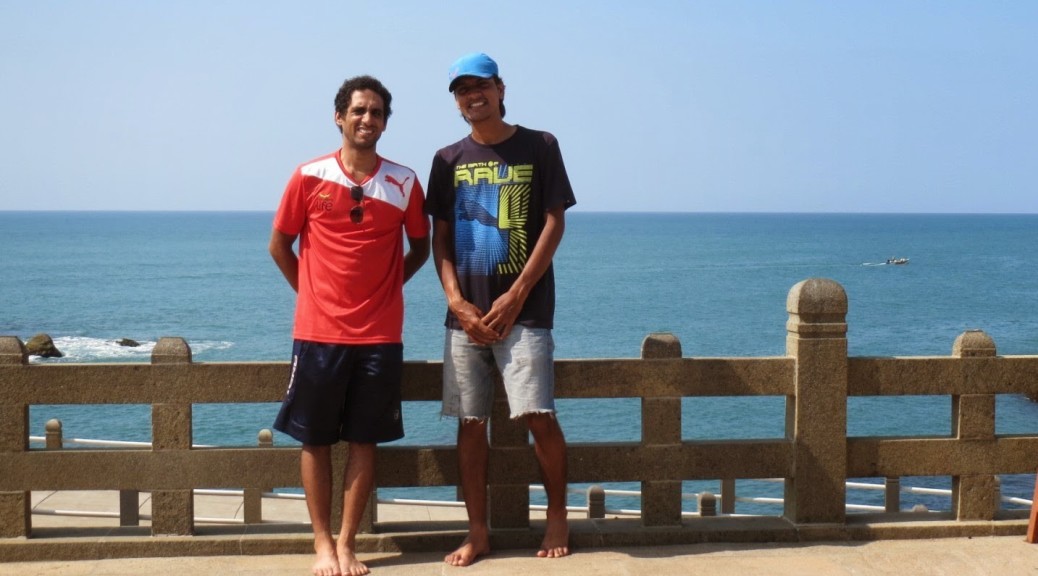 We woke up casually knowing there will be no more day long cycling on this trip, but that meant it was still early by the urban standards – 7.00am. We left for Swami Vivekananda Rock Memorial after a quick breakfast. It was low tide and the ferry to the Thiruvalluvar statue cancelled. At the memorial we enjoyed the 360 degree view of the water more. Back on the mainland we had a v. bad lunch at a dhaba which advertised Rajasthani, Marathi, Bihari and all types of cuisines, the kid waiter too well aware there is nothing like as advertised. By evening we again moved out on the beach for the sunset and roamed around saw the fish-display. Back at the hotel room, we were able to get English and Hindi news channel, which was must since we had to spend some time here. Entire day was eventless !

Yet another day in Kanyakumari, We weren’t sure what we would do today. However we woke up early as we had to catch the customary rising sun at the tip. As we came back from our early morning event, At the reception desk, the manager too was a little surprised,

Continuing for another day Sir ?

However today we atleast had one task at hand – parcelling our cycles back to Mumbai. We were gonna ship it on next day’s train to Mumbai – ie on Feb 28, that would’ve reached Mumbai early morning on 2nd March, perfect for us as we would’ve reached Mumbai on 1st and picked our cycles the other day before office. So we headed out with our cycles, I asked Surya we should just check more of Kanyakumari on the western front, and we continued on that direction. Through small villages, etc, I saw a nice river crossing and said we’d return back from there, When we reached the river crossing of Manakudy, Nagercoil was just around 10km away. On the way back we did find the board stating – Kanyakumari with that big underline. We asked a rickshaw driver to take our snaps with our cycles held high over our head.

At the Kanyakumari Railyway station, we had travelled well over 16km for fun! unnecessarily along the the Southern sweltering sun soaked shoreline. At the station, we purchased parcel tickets for the cycles costing around ₹640 and the coolie packed our seats with a gunny bag nylon cloth writing out some random nos. over it and said.

We dozed off, and again by 5.30pm headed for a stroll around the beach. Came back and had dinner at the hotel’s restaurant finishing our last day in Kanyakumari.

We woke up early as we had to board the 16382 Kanyakumari – Mumbai Jayanti Janta Express. We reached well on time at 6 before trains departure at 6:55am. However, the train was more than hour late to leave the southern tip, we reached TVM (the Indian Railway code for Thiruvananthapuram) around 10:00am enjoying typical crowd in an unreserved compartment. At the door was a north indian man who probably was high on Ganja / Marijuana and shouting slogans like

At TVM, both of us were having bad headache, I also found my entire body was aching, I wondered if I hadn’t contracted any viral fever. We quickly found a hotel and immediately dozed off, in the noon headed for lunch came back, and again dozed off. By early afternoon when we woke up, Surya felt better, I still felt my head heavy. We roamed along the Chalai Bazar towards the Padmanabhaswamy temple. There was post-graduate student’s peaceful agitation going on in the M. Gandhi Park. We stayed there for some time, trying to comprehend the Malayalam language and headed towards the temple when it started raining.

After the quick rain, we enjoyed the temple drama of specific dress code, etc and came back to the hotel. At night after dinner at the same hotel we were dead tired, today we hadn’t cycled a bit, still were  exhausted.

Tomorrow, it’ll be our home – back to Mumbai, Maharashtra.

We had late morning flight to catch, we thought we’ll enjoy the last mode of transport that had been missing in our trip – the bus. We took a bus to the domestic airtport from M. G. Park to Shangumugham Beach. The ride through a foreign town in its public transport system has a charm of its own. Whether its Metro in Delhi, a tram in Kolkata or a bus in TVM. There is always something interesting. Over here Surya found out none of the buses had windows – just a thick clothed curtain like cover and the exit door of the bus always has to be slammed hard. Probably it was a tradition.

On the beach we found a lovely mermaid enjoying the sunbath and an equally relaxed human with folded legs and arms behind his head enjoying the morning. The beach water was just as blue as it could get, a sight on this trip – the blue waters south of Kollam, that just kept you intrigued.

The Air India AI 668 flight was on time and luckily we were served lunch by a relatively young air hostess 😀 who even asked me if I had ran the corporate relay marathon after looking at my red t-shirt.

As we touched Mumbai, the loop was completed, the circuit closed and the end of the journey. A tour that would’ve etched events on our life, stories that would be remembered for a long time to come.