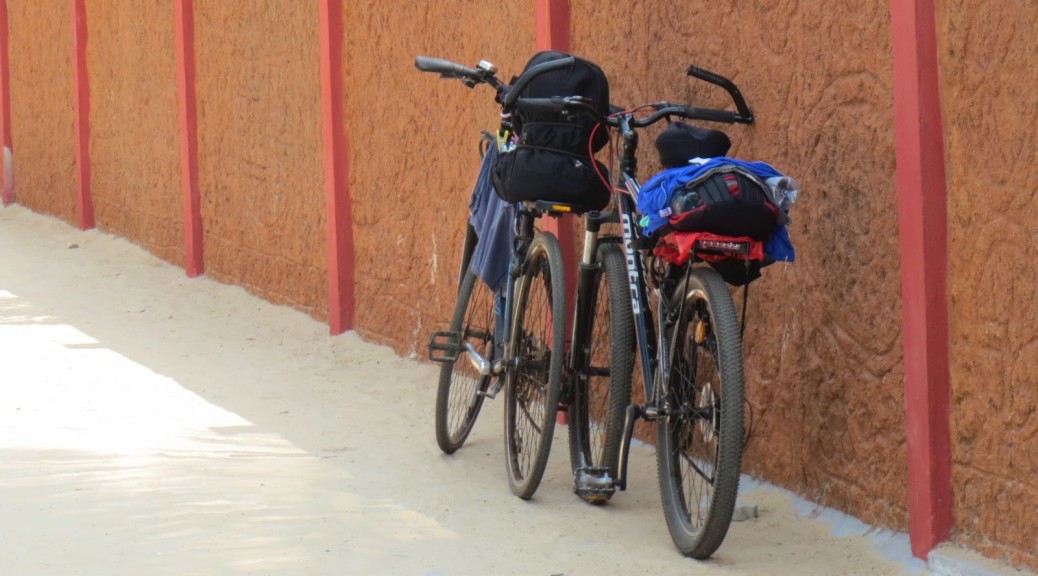 As the journey finally came to a halt with the AI 668 touching down on CSIA we had travelled well over 3800 kms in total out of which 1100 kms were on the bicycle and the other distributed over bus, rail, ferry and flight. I wonder what did we get out of the journey ? To start with I wouldn’t forget some of these…

In Kerala, while we travelled early morning typically during the early school hours around 8:00am, It was wonderful to see kids boys and girls alike packed in their school buses or walking in a long file on green grass to get their daily dose of education. I remember Surya saying he was so happy to see kids trot to school unlike his state of UP. The schools too were fairly well established. Most of the boys out stretching their hands to high-five us travellers, perhaps a sense of adventure they enjoyed by doing that while girls just stared from the corner of their eyes and giggled. No religion stopped them from getting their share of education.

Just as kids, all travellers along the road were equally perplexed by two cyclists carrying a small back-pack along. Doesn’t it feel good to enjoy a brief chat with a total stranger who asks you about your native, the road you travel and then finally wishes a warm luck from his heart? At times motorcycle riders used to travel alongside us and kept talking. Near Ankola a rider almost kept chatting for 5 minutes covering well over 2-3 km, in Kerala a random rider would start in Malayalam and after acknowledging our reactions would promptly start in English.

Travelling always takes you along some beautiful places. And its at these places you wonder that all the slogging we do at our work in cities is for a peaceful life. While travelling through Padukere road near Malpe, the residents of that road had a narrow land strip of 20km to themselves with sea and back water bordering it and a small lovely cottage for their dwelling amidst coconut trees. I wonder if the richest could afford such a peaceful luxury in the urban jungles. Life completing a full circle over here, with the natives enjoying their daily chores in the surroundings.

The joy of discovering a new town everyday! Every single moment on the trip we ended up looking and experiencing something new. Every evening when we headed out after our wash into the new town / village we’d experience the similar but still a different vibe of the place. Even in urban Mangalore, we discovered the special taste that people had for “Gobi Manchurian” which further down south was intact as a vegetarian delicacy – though the name of the dish getting corrupt to “Gopi Manjuri”. The entire southern India’s effort to keep their waters clean was astounding, no where from Goa to Kanyakumari did we find plastic bottles or bags or filth floating in the water, they kept it clean as their own surroundings. The love people had for southern cinema, especially the male actors – they were worshipped! Leave aside Rajni sir, even newer entrants like Surya had fan following and fan-clubs in villages with their posters. Southern India has a special liking to worship. Once I found a poster of Paul Walker with bold lettering – Always Remembered ! That place was a car garage!

Most of our journey was through Kerala, it wouldn’t be wrong if I could call this a Kerala trip. In Kerala people love fruits, every corner you’ll find neatly decorated and arranged fruit shops. And its these fruits that we loved through out our journey. I must’ve had over 20 Pineapple juice glasses and addition to it was Black Grapes, Mosambi for Surya and our ever-green Sugarcane juice. Sugarcane was like our recreational drug – every time we had it on a hot, sweaty day, It gave us an instant high. Bananas – I generally dislike bananas, but I found them as best source of early morning diet. It was definitely on this trip that I’ve really understood the importance fruits and the flavour along with colour that it adds to the life.

Every new day that we started, we were apprehensive of the road, the people, the route, whether we’d have a problem with our cycles… But as the day followed the negative thoughts moved away and we absorbed the moment as it was. By the end of the day it gave you a sense of victory that we’d travelled around 100km unscathed and joyous.

There is obviously more to the trip but somethings are left best to be experienced hot and first hand rather than reading it on your cool office bay.