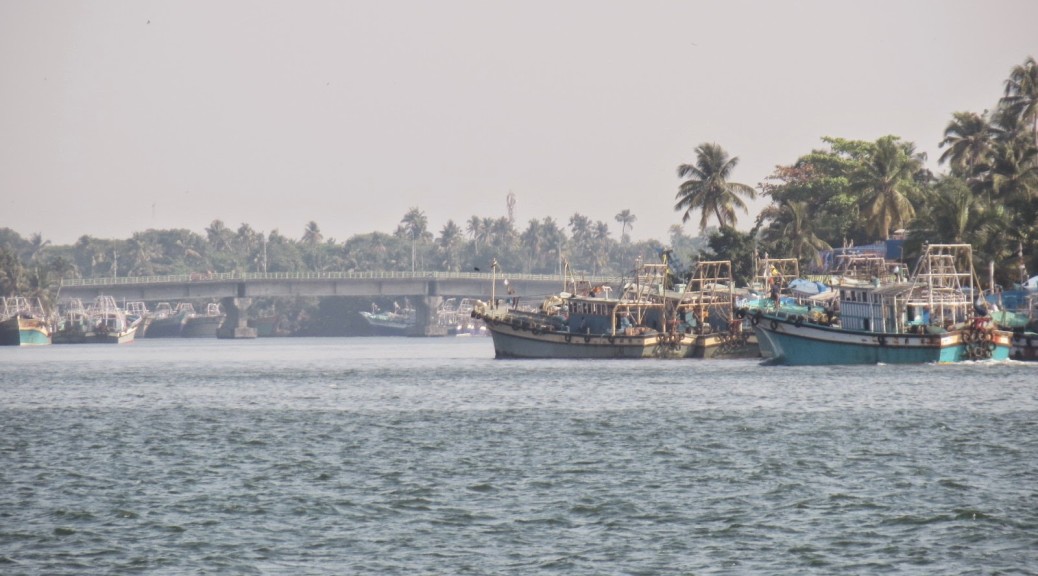 Tirur hotel tariff had a breakfast included option. And we didn’t want to miss out. However, we had to wait it was almost 8.15am when we got our room-service guy (a Nepali) to deliver Poori (almost like a bhatura) and aloo rassa (soupy like potato curry). It was yummy. But we were stuffing ourselves – generally by this time we would’ve covered 20 km.

We finally left Tirur by 8.45am. We had our first big river crossing at Chamravattom where we headed south of Bharathappuzha river. As we towards Chavakkad from Ponnani, we could figure out a change. The majestic, big bunglows were dwindling. The typical white-grey combination of colours now turning colourful and looking more local than urban. Probably the Saudi influence was lesser here.

Even though the route to Chavakkad was flat and straight – it was boring. Riding on any highway is not a cyclist’s paradise. Even in the early sun of 10.30am, it was tiring. We stopped for our traditional juice break at Chavakkad and continued south, today we had to cross the longest river in Kerala, the Periyar River and head into North Paravoor. Around noon, it was getting utterly tiring we were close to Valapad where Surya asked if there is an alternative route. Google Maps suggested that there is an inner parallel route to NH-17 that continued right till Azhikode where it showed a ferry crossing for Periyar River. If the ferry didn’t work it was max of 2-3 km. extra riding. As soon as we took a right at Valapad for the beach road, the hot and dusty ride turned into a lovely canopied and cooler comfortable road. The flat straight big tar changed to a curvy smaller route. We stopped for coconut water refreshments and continued along the coastline. This road gave me the feeling of riding through Konkan villages, where the road is small, clean, trees all around. The houses not too big, colourful. Beetel nut trees swaying along with its Coconut cousins. No sooner we were in this scenery, we started to feel a lot better. The tired legs felt springy again and with more zest to continue further and longer.

Along the way stopped near Majestic beach which was more of a rocky boundary to the Arabian sea. Had some Electral water and biscuts and continued down south. Around 2 somewhere before Azhikode we stopped for food. After which at Azhikode we waited for the ferry. There was a different queue for the cycles! On the other end at Munambam, we saw a local Kabaddi tournament. Teams from Kochi, Trivandrum, the local town, Thrissur and even from Kollam were participating. Kerala does promote sports much better than its siblings. Crossing the backwater at Cherai we got into N. Paravoor. We tried the inner city but couldn’t really find a good stay. Either it was out of our normal budget or just didn’t fit in. We decided to continue along the NH-17 and we found a hotel ‘White City’ around 6pm.

Post our wash we went to a local Pure Veg. restaurant, again the menu was same. No real veggies available. Had to do with a Paneer subzi and Kerala Parota. Back at the room, we continued our dosage of Kollywood songs. But we couldn’t latch on to something specific as last night’s Shruti Hasan movie. Sleep was dead on time by 9 – 9.30pm.