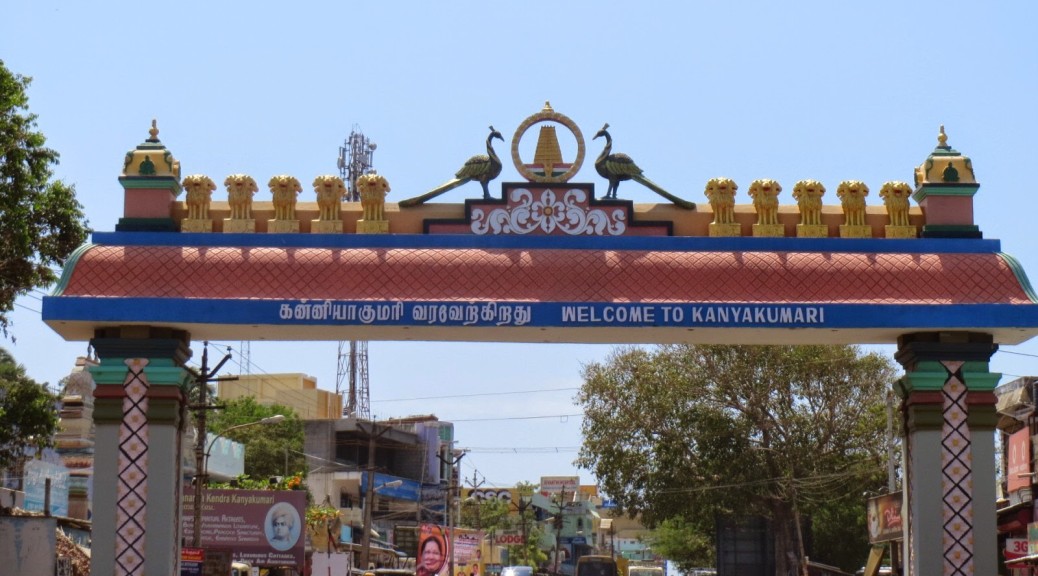 Left around 7:15am, excited that today is the day! The Parassala town which is the border town of Kerala and Tamil Nadu isn’t really exciting. Forget a buzzing border, but there isn’t even a warm welcoming sign as we cross into Tamil Nadu, our 4th state in this trip of ours. However Kerala did bid us a farewell. The road was really bad in terms of riding. First it was quite frequently climbing hills, then it wasn’t the widest of stretches of the NH-47 with a slurry of buses and cars all along, to add to the misery it wasn’t smoothest and the cleanest as well. These attributes took away a chunk of enjoyment when we stopped for a tea break around 8:40 am, Nagercoil was still 20km away. We had just managed around 15 ~ 20 km in last 1 and half hours.

We saw huge mountains to our left and wondered if we had to cross them. By the look of those, they were ominous, however the road navigated from the sides and we reached the southernmost big town of Nagercoil arond 10:15am. Had our share of  Pineapple, mosambi and black grape juices. We saw the sign of “Kanyakumari – 20km”. When we were back on our saddles, Surya said that he wanted to capture a photograph of the milestones at the distance of 20km, 15km, 10km, 9, 8 and so on until we reached the underline – Typically each of the towns / villages at the centre had a milestone / board with its name written and an underline and not really a Zero (0).

The roads continued to be bad at least 2km ahead of Nagercoil, but then we headed into the typical southern scenery. Tamil Nadu is one of India’s highest Banana producers, and this did reflect well along the road. Typical village cutting roads, with banana plantations on both the sides spreading acres on every flat land available with huge mountains as the backdrop.

Around 2kms to Kanyakumari, and we saw a huge semi-circular board above the road – “Welcome to Kanyakumari”.  It was close to noon. Into the southernmost tip of the Indian Subcontinent, Cape Camorin, the cyclists kept pedalling. We got into the Vivekananda Kendra and checked out its surroundings, the rooms were full and it needed a pre-booking of 6 months. We roamed on the cycle in the kendra full of ashrams, meditation centre, temple, museum like exibits, school and its own beach to enjoy the sunset. The sunset point at this beach was a little untimely for us with the noon sun blaring with its full intensity. Then we moved further south as long as we could travel where we finally met the sea. Quite literally the tip! Couldn’t get any further south on this Indian peninsula !

We checked into “Maadhini Hotel” after a round of sugarcane juice and had our lunch in the basement restaurant. At 4.00pm we headed out again towards the Railway station to find about shipping the cycles back to Mumbai. The sleepy station was having an empty booking window, the guy estimated that it’d take around ₹700 to package the bicycles. Back on the road we roamed along the southern tip and enjoyed the setting sun which in this place seemed to have emerged from the sea itself and merge back into the ocean.

In the night as we strolled along – without our cycles – It was a little difficult for us to believe – We were in Kanyakumari!