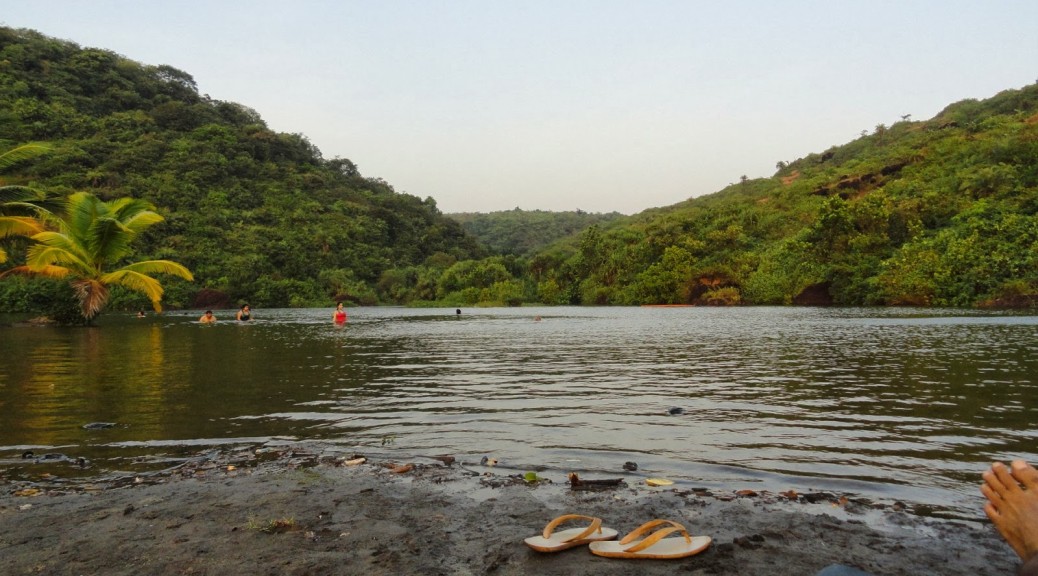 We left early for Devbaug. At the beach the guy charged us ₹300 for a minute’s ride opposite Devbaug to Bhogave beach. From there on we trotted on foot to reach a road leading to सागरी महामार्ग (Coastal Highway).

There on the roads were always up, down, winding, scenic till we reached a ghat prior to Vengurla. Where the road climbed, not just it but it worsened just stones stuck in tar, the upper layer of tar had weathered away. Our cycles too took the brunt of the bad roads. When we reached down Vengurla almost as soon as the ghat ended, our wrists were aching. We had some heavy breakfast of ‘misal pav’ and carried towards Goa.

On our way just prior to Arawali, an uncle waved Surya asking him to stop. He asked about our trip and said that it was his dream in his youth to do the same, he then invited us to eat ‘unforgettable groundnut ladoos’ (similar to groundnut chikki). Had tea in the shack selling those as well, all on the house. We thanked the uncle and carried towards Redi and then Terekhol (Tiracol). The ferry just evaded us but it came back soon. The ride to Goa crossing the state border was free !!

And there we were having crossed 4 district boundaries and 1 state border in Goa. Tiracol to Aarambol wasn’t far away another 20mins and we rented out a sea-side room for the night. In the evening we went to the Sweet Lake and had a good swim.

I planned the next day I’ll have a visit to my sister’s place in Succorro. So we left around 10.30 having breakfast, tea, icecream and lunch. It seemed as we ate more than we rode. We had confirmed a bus back to Goa which would ensure our cycles too got a ride back which departed from Mapuca. So after an enjoyable time with my sister and her family we headed back to Mapuca for our journey back to M U M B A I.