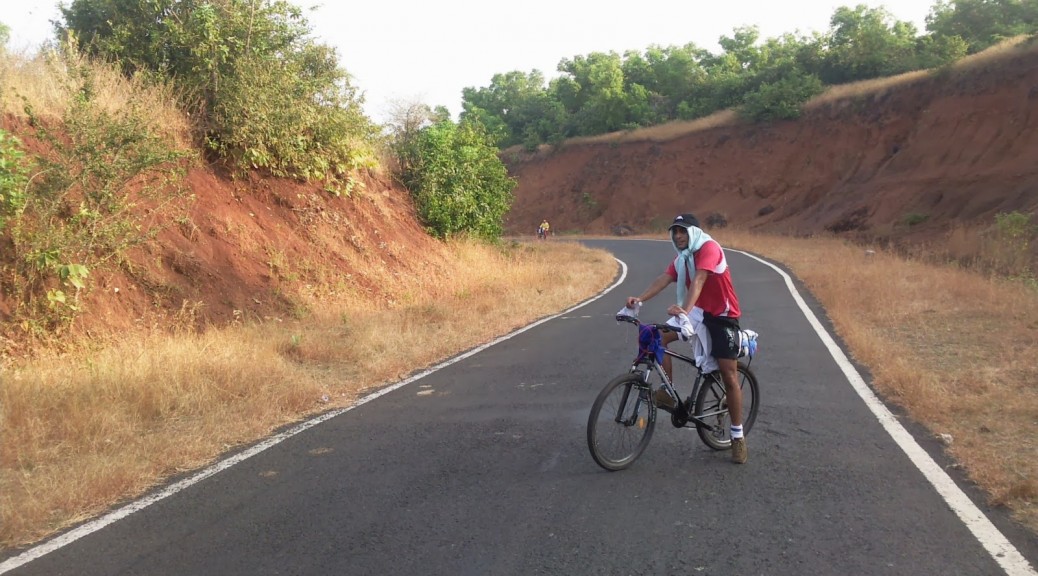 It was my first time that consecutively I was gonna do another 60km+ stretch on cycle. Bum a little sore, but doable.. The lovely small ghats enroute to Shrivardhan via Aaravi was morning bliss. Surya getting some Salman Khan styled photos (also read as without T-shirt).

We halted at Shrivardhan for ATM, coconut water etc and headed towards Harihareshwar, just as long the name is.. so seemed the distance. The ghat to Harihareshwar was never ending, the worst part – heat! Konkan doesn’t honour Dec. 1. Heat stays and so does the humidity. Puru’s cycle and its bag weight too show what is extra / unneeded at such a trip. We had to stop on the ghat under a tree where we felt we couldn’t move ahead without some Glucon-D. The ghat had started post a dry barren flat road which had the sun drain us out. We reached fairly early at Harihareshwar, 11.15am. But we felt we had travelled 100km+ thanks to the Konkan terrain and the sun.

Post food we moved towards Bagmandla jetty, where the govt. ferry service would’ve made us wait for more than an hour, the private one was earlier. Opting for it, we waited for it under a banyan tree, a typical tree with a peripheral wall around it so that travellers like us could rest. It was there where we found our ‘guide’ or rather a misguide. He said that we could go to Kelshi (our scheduled day-2 destination) via a shortcut, then Ganpatipule was just 40km ahead of it !!! Yes you guys read it right he said Ganpatipule. When that Ganpatipule distance came out his mouth, I knew he wasn’t to be believed. He kept talking, friends, bullet riders, etc. Of all the crap that he gave us, two things were right – Bagmandla to Bankot, You change districts, Raigad to Ratnagiri and there was a ferry (boat) ride at Kelshi and a huge huge shortcut!

Bankot, Ratnagiri. We had crossed into the famous Alphonso mango district. Guys on the ferry had warned us that ferry at Kelshi was not to be relied on. They said luck could help us get through. We still believed and kept asking the local fishermen about it, they were happy enough to send us that route, बोटी मिळतील, We would get boat rides.. Bankot to Velas we had to walk, climb on footsteps through a sea side terrain of rocks, sand, beach and get on to the road which connected Velas.

Ahead of Velas was another ghat, rocky, full of red stones, red sand and bad roads. The decent was a full speed one, our suspensions just mildly protecting our frames and our shoulders, but Surya’s thirst for a down-hill full speed decent knew no boundaries, bad roads, steep slopes, incoming traffic, nothing stopped him.

Down the hill, we were straight at a creek. We couldn’t see any jetty! all we saw was some fisherwomen getting off the trucks, tempos, tuktuks and walking straight into the ferry. We asked one for Kelshi, she pointed us straight towards a small village across the creek. The sand/soil was too wet to walk with shoes, we tied them on our cycle frames and walked into the creek. It was lovely! Our cycles, us and a huge tropical Konkan scenery. We were thrilled to get to this end and already said that this crossing was ‘पैसा वसूल’ part. A boatman just had taken a woman on the otherside and while rowing, he shouted that he’ll be back, just wait. When back, what we saw was not really possible. In his small boat, we had to cram 3 cycles and 4 people. The boat all by itself was something of a canoe and just as much of imbalance with such a payload.But Mr. Abbas, was confident and led us through and even posed for our cameras while we toiled to keep the boat aflot.

The small boat ride of less than 10mins led us to Kelshi village, probably my ancestors’ home. A girl helped us clean our foot in her backyard and then we rode through our 2nd favourite road types, cycling through narrow village roads, winding up and down houses, small shacks, etc. We reached Anjarle beach again during sundown and decided that would be our stop for the day. We had 10 उकडीचे मोदक (rice flour steamed encapsulating coconut with jaggery – konkan sweet dish) as well at dinner 😀