The alarm rings at 7am. Its the last day where we can afford to laze post the alarm bell. Today we’ll start our journey back to the Financial Capital of India, Mumbai. However a little of Kerala is still left on the plate. Its JK’s cousin’s engagement, the very engagement that JK wanted to attend, miss, I’m confused just as he was all the way. Eventually he will have to make it. We ready with our bags, luggage, bikes keep them semi-ready. We’d make a quick trip at the engagement and then off to Hosur, Tamilnadu, our first night halt on the way back.

At the engagement, women are draped in lovely sarees, from colorful to golden striped off-whites. The men, however is a different story. Everybody, almost everybody has put a shirt, un-tucked – On a मुंड ! Ya – the मुंड. That’s the tradition, it looks weird, but thats what it is. JK is bending every muscle of his neck to take a look at available beauties.

Just one, right JK !? Right far in the corner ? 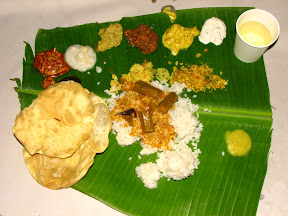 The food luckily is not a traditional wedding-lunch as we all central-to-north indians know of. Its a पंगत based seating system (Where tables are lined up for batches meals to be served), I never liked the buffet. The banana leaves again doing the honors of holding the vegetables, rice and rassam and saambar. The local food items reminding you of being in the heart of a coconut country. The hot sabudana-kheer is different from what we have in Maharashtra, which is a watery, milky sweet liquid with beads of Sago. Here however its more of a thick creamy basundi mixed with the starch ball-bearings.

Party over, we head back to JK’s place again. We’re already late its almost 1.00pm. About 400km to be done today, and its already more than half of the day gone. We’ve decided to take the route via Bangalore, avoiding the slow, narrow and perhaps bad roads through the hills around Ooty and take a de-tour via Salem-Bangalore. Its gonna cost us about 100km+ extra, but assured good NH road quality.

As we cross Palakkad, its gets very breezy. Too much cross-wind. At times I slowed down below 70kmph just to ensure my bike is stable. The winds continued post Kerala-Tamilnadu border. Which also welcomed mis-maintained roads and signboards. The same scenery that got us so excited when we had crossed Chitradurga was no perhaps repeatingly boring. Coconut trees, trees, farms, big road, windy road and a lower torqued motor under the seat. We manged to fight off boredom, we had a heavy meal around 11am so it helped us carry on for a while. But by 3.30pm we were getting tired already. Tamilnadu’s NH construction was a huge difference if compared to that of Karnataka. Each NH diversion in Karnataka was a neat tarred road, however here in Tamilnadu it was just a mess of cement, rocks, pebbles. And only a rider knows what it means to be tired and riding such roads after a smooth highway.

We decided to halt for some tea/food. The place was Perumanallur just ahead of Avinashi. We stopped near a dusty road-side stall frying some oily vadas, etc. We were tired from the dust already and wanted something better than oily vadas. We switched to another dusty shack – labeled as Bakery. We had some tea, and ordered for biscuits, Parle biscuits always taste yummy when hungry. JK asked why its a bakery, and whola! – Cakes – were the reason. We hogged on the cakes a plate after another.

The start was inviting, a CBR 250R ripped through along with a Unicorn Dazzler. Behind those guys the ugly sounding Bullet ‘thumped’ through. We followed those guys when we were greeted by another noisy two-wheeler, a vintage by modern bike standards – The Yezdi! Whining and crying motor of that vehicle was heard for long, while the rider followed the modern machines dragging his bikes’ ass along.

Bhavani, Erode by-pass, Salem followed. It was getting close to 5 and we had not even reached Dharmapuri, the skies were starting to show off its crimson colors mixing with the blue. We decided we’ll rip till its dark and then halt for tea. By the time it was Dharmapuri, it was already dark. Another riding session in the dark was in store for us. We continued slowly around 60-70kpmh till we were bogged down by continuous diversions. JK rushed towards me signalling for food. I nodded and found a neon-lighted restaurant by the side, we thought it looked as a good option and headed into it.

The restaurant was big, clean and the food was yummy. We asked the waiter about the location – Krishnagiri as he mentioned it. Which meant another hour of riding for Hosur, as we relaxed and waited for food, we enquired about the stay in adjoining hotel, which was too clean, had a nice view of a highway. We decided to stay back in Krishangiri. Back at the room, we were so happy to see neat clean beds with a blanket! Rest – finally after 350km of riding.

Today 6am alarm wakes us up. Outside, its cool and pleasant. I can see a big green sign board –

I tease the guys, lets also visit the eastern coast of India, just 300km away 😛 We head off around 7.30am. Our stop for today is Kolhapur, a freakin 700km away! As we get into Bangalore, the morning rush welcomes us, we take the N.I.C.E road which had a whopping Rs. 55 per bike toll for the Tumkur end. Well, it didn’t disappoint, it took us through 60km+ of 6-laned highway. Karnataka had started bigger roads, lesser traffic. Another way to say – boring. We stopped for fuel, where the guy overflowed Manas’ R15 when accidently his mobile fell off from his hand. Two things he did awefully wrong 1) Didn’t concentrate on fuelling 2) Talked on phone while doing that. We had some breakfast immediately and then after downloads (Each one of us !), we hopped back on discussing how empty and clean each one’s gut was. Tumkur followed and then Sira with its another set of large no. of highway constructions. We had completed a long loop.

The return journey is always the most boring, after knowing the roads, the scenery, you’ve got to traverse it again for hundreds of kilometers.. I was idling around 80kmph in the crosswinds when Manas zipped to me and directed …

I followed as directed, in the crosswinds revving at 7500 rpm for 95kmph. We stopped at Davangere for lunch. Our first punjabi-dhaba, owned by one too! This one had a Naepolean mastif and 2 pugs as its co-owners. The food was strictly OK. We chatted with the owner about the dogs, and bikes. He asked if we had been to Leh, and advised …

I exchanged looks with Manas and JK.

Kolhapur is still 400km away, so it can’t be our night halt for today, we decided on Belgaum and burned the rubber… Around Hubli it was past 5.30pm. We did that narrow stretch of 2-way road after which we halted for a water and pee break. I kicked JK in his butt.

Manas followed suite with more road-manners for local transport buses. Belgaum is on the hilly side.. We started climbing, and we saw the same palacial building ahead. After crossing it, we stopped for directions, where a truck driver directed us to take a left under the next flyover for Belgaum city. In the city at a traffic circle, I asked an old man for a hotel.

Woho! I’m in the language-battled land – Belgaum. Haven’t heard pure Marathi in all this trip till today. The hotel was decent bargain, just Rs. 920. with complementary breakfast. JK commented

We had a cold shower, Manas frustrated…

Then headed for the bar & restaurant, closing our day with last 500km pending for our return.

The idli is pathetic as compared to the more southern India’s idlis. The early morning breakfast readies us into the last butt-burning ride of our trip. We top-up our petrol, air pressure and hit the throttle hard. At times I land up almost a km ahead of the two bikes, then slow down. This continues till the top end of Nipani’s ghat, where JK finally stops inspecting his bike.

Manas is happy that its not another accel. cable break. We continue, the ghat climbing down to Nipani and then in a minute to Kagal. Maharashtra!. But as soon as we cross into Maharashtra, the whole landscape ON the road changes. From barren lands to continuous villages along the road. From a sparse vehicles to busy traffic of buses, transport vehicles, private cars and local bikes ferrying in and out of villages. This was a distinct change observed while crossing into Maharashtra.

However the sweet smell of molasses and jaggery continued from Nipani. We halted at Kolhapur for another top-up of Petrol, where JK while climbing on the bike is unable to handle the weight and lets the bike fall on the ground. He seems to be very tired.

Ya, true another 400km still to go. We continue however, Maharashtra not feeling as scary as Karnataka’s barren NH4. After our early breakfast, we’re hungry and stop just after Satara for lunch. Its just 12.15pm. We order for 2 special chicken thaalis and one zunka bhaakar thaali. JK loves the combination of ठेचा (crushed chillies with salt and lemon) with झूण्का भाकर (Indian bread made with Jowar and Baajara). Its very pleasant, and we continued to rest after food.

Pune goes by and so does Lonavala. We stop by at Khandala overlooking the valley. Along with sipping tea we watch stupid R15s, CBR250Rs revving alternating the throttle as if they’re riding Chetaks. This is our last tea/food break together. We just relax watching the road and getting lost in conversation from किस्से (incidents) through our trip in last 10 days. We spent more than 45mins over tea, thats how tired we were and how wrecked over the journey getting over.

We stop at Juinagar to bid goodbye to JK and then wriggled towards Mumbai. As soon Panvel started the air was so foul smelling and polluted, that I ended up having a headache by the time I bid Manas a bye at Dharavi. The last few kms to Khar were a pain in the traffic. However the end point, HOME with a hot shower and a bed to crash wasn’t.