The back waters beckon. Its one of the attractions that we had in plan for the Kerala Trip. JK’s incessant talk with Kamruddin continues. History, polictics, foreigners, art, women, Kerala, Middle-east, you name it. There wasn’t a topic that was left unturned.

Mallus speak a lot and malayali is a compressed language.

JK’s validating every letter of his statement. Kamruddin has suggested us that we should have our breakfast at Idli anna. A locally hit fellow whose idlis are the softest, yummiest. So good that he has earned that sobriquet.

An autorickshaw ride takes us to Idli anna’s eatery. A small room for sitting less than 10 men’s seating capacity, with a small kitchen as well. We entered and as our urban seating logic dictates, we selected the most secluded of the seats. A fellow in cream shirt and the folded मुंड (local name for the lungi) came and asked us to seat ourselves as close to the other patrons having their breakfast. We told him about our choice of breakfast. While we adjusted in the small seats, the guy rushed and put 3 banana leaves in front of us. No sooner the leaves landed on the table, another guy put white idlis on the leaf, twisted his other hands, overflowed the idlis with chutneys and sambhar.

The idli was the best I’ve ever had in my life. One thing that astonished me – how could they get those idlis so WHITE !? We gulped idlis after another, while our half plate prince, Manas indulged in the wada. The white chutney too was so tasty, it was over before the idlis were, and as the tradition goes here – Extra chutney and saambhar don’t cost extra. JK capitalized on that rule whole heartedly. With mine and Manas’ smaller tummies getting fuller faster, we ordered for coffee, while we saw JK continuing on his gluttonous journey.

3 pairs of steel vaati with small glasses and the coffee was placed on our table. I found it to be hot, and waited, but then eventually placed the glass to my lip. I found it to be a little bitter which perhaps was too obvious for the idli anna, who promptly took the glass from my hand and poured the coffee in the vaati and then back into the glass. He did it for 3-4 times and handed the glass back to me.

I saw his squirmy face, and realized he hadn’t mixed the coffee, so I helped. And now after mixing look at him I see a glow in his eyes …

– That was idli anna’s immediate reaction in Malayali, obviously to JK who understood his tongue. JK adding a thunderous laughter explained it to us. I too laughed and spoke back to idli anna

He gave back a big warm smile, and we head out towards the back waters. 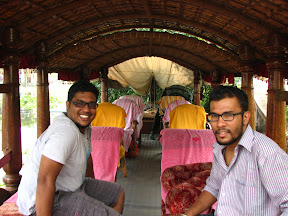 A big shikara waited for us, with 8 laid-back chairs placed in pairs neatly covered with clean turkish towels. Aaah !! luxury ! The shikara covered protecting us from the sun, started with our young boatman rowing us through the waters clogged with Water Hyacinth. Oscar, our shikara head through the smaller channels to what seemed like a bigger water way ahead. I asked JK to start his GPS so that we could enjoy technology with nature. 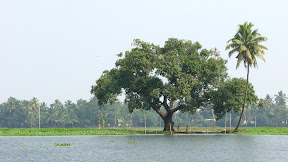 The December day in Alappuza was around 30°C, humid as expected but not uncomfortable. As the boat moved through the urban water channel complete with Petrol pump for boats, small jetties every few 100m, the more beautiful picture of Alappuza unfolded. Coconut trees coasting along the banks, with other trees adding a different hue of green continued to ride as far ahead as our eyes could see till it faded into the haze. While we kept snapping at the landscapes, the boats, the house-boats made their appearance as well. With night rent begining from ₹ 6000 a night, they were full with the latest stuff, air conditioning rooms, wash rooms, LCD TVs, you name it. Mostly made in wood, they were covered with mats made out of bamboo. We moved from the smaller channel towards the bigger lake, Vembandu lake, almost 5 km. in width and 7km. in length, connected by other backwaters from north upto Kochi.

At ₹ 450 an hour, it seemed like bargain. Time seemed to have stood still. Our daily express routine come to a halt. We took a right turn where we then headed for a small hotel to have refreshments. We had coconut water on the man made island which is actually below the water level. Only the tall borders made out of natural materials preventing the water to come in.

In the rain, the land gets submerged under the water

replied the boy, when we asked too many questions about the physics associated with the land.

We concluded our trip in about 3 hours, then walked around in the market in search of a restaurant. JK called up Kamruddin, who said post 1.30pm u’ll possibly only find Annapurna open. The pure veg. annapurna was though was nothing more than a lunch home. We ordered for 2 veg. thalis while I wanted wheat and not rice, I went for chana and roti

When the lunch was concluding, JK called for Sambaaram, the guy came and JK opened his palm he poured the white buttermilk in his palm, JK drank it right off his palm! The guy shifted his focus to Manas, who did open up his palm and was thinking of what should be his procedure, should he drink it off the palm or should ask in a vessel. But before he could give any cycles to his CPU, the guy had already poured the liquid in Manas’ partially open palm. And before Manas knew, the liquid had drained from his palm. However just to keep the tradition, Manas duly drank the remaining liquid off the palm.

We came back to our cottage, to find our clothes dry as paapad in the Alappuzha sun. JK and me got into the verandah and I threw myself on the swing, putting my legs on the adjoining chair, when I heard a crash. JK had tried to get comfortable on the long, leg-extending-chair, when the chair had just collapsed under JK’s mass! Both of us couldn’t control our laughter.

Last day’s bad road patch had caused my bikes turn indicators to stop working, adding to that we were at the southernmost end of our bike ride in effect completed half of our journey. A bike checkup couldn’t be bad. We decided we’ll fix my indicators at Honda Service while JK too would get his oil checked, etc. After getting a pilot ride by Kamruddin’s elder brother, we ended up in Shyama’s Honda.

We called for a mechanic / technical supervisor. A tall guy, came in.. started to speak with JK. He checked our bike registration numbers, MH … He asked Maharashtra? To which JK replied ya, from Mumbai. He was zapped by that name of the city. He continued

Looking at my Gray Unicorn, with big eyes he continued …

JK laughed out loud, while me and Manas looked at eachother. Manas quizzical,

Whats wrong, why is everybody so taken aback by Unicorn as the touring machine ?

Dilip, the tall guy, took my bike to the servicing rig and we like curious kids followed. A mechanic opened a side panel and got the indicator working. He said a plug had just fallen off. I asked Dilip to check for chain slag and see if I need to replace my oil. He nodded and asked us to wait outside. In a shortwhile he came back with the bike. He said the engine oil was good enough, tightened the chain and the brakes as well. I confirmed again

Is the oil OK to take me back to Mumbai ?

He smiled and confirmed, I asked how much would be the charge and he said – Nothing !!! Guess what – Nothing  !!? Had it been any other service center in Mumbai, first they would’ve had kept me waiting at least for an hour before a mechanic would even check my bike, then would’ve applied random charges, etc. But here in Kerala, it was free ! Manas told us stories about such incidents happening with other bikers when they had ventured into far off states, the guys would just do it for free. Today was our turn to get pampered.

On our way back, the blessing in disguise did its work. JK suddenly stopped, trying to rev hard. We stopped to see in shock that JK’s accelerator cable had broken. Yamaha showroom was just near by. But it denied doing any servicing, and said a service center was just by the corner. At the service center, we were little apprehensive, as certain parts are sometimes out of stock. And that exactly came to haunt us. The Throttle cable for FZ-S wasn’t in stock. But the resourceful mechanic said he could try the FZ cable and called for inventory check.

All of us were facing a reality which wasn’t luckily not too bad, rather too good for us. Had the cable snapped somewhere in the Bandipur or Mudumalai national parks or on the highways of Karnataka, then we would’ve had a torrid time to get the bike to mechanic, leave alone getting it fixed correctly. We could’ve had easily lost a day of the tour. But luckily all this happened right in the middle of a town, with service centers close by. Manas was careful enough to carry all the cables, engine oil and even the spark plug with him. He even had a huge toolkit with a foot pump. He warned me that anyone of us could face such an issue and we should stock our luggage with basic spares. So I headed back to Shyama’s Honda and got myself Engine Oil, Clutch cable, Throttle cable and a spark plug.

Back at the Yamaha service center, the mechanic had managed to fix the accel. cable correctly on the FZ-S. He checked the engine oil and recommended changing it. The oil level was near minimum. Manas closely followed his procedure of checking the oil and even verified it once. With boys’ shopping done, we head back to our cottage, about 7km from the service center.

At our cottage, Manas was finding hard to get a consistent reading of Oil level, after several attempts, the conclusion was – low. We decided to go back to the service center for the oil change. At the center, it was close to 6.15pm and the mechanics were almost done for the day. The lead mechanic who had helped fix JK’s bike asked us to come back next morning after 8.30am.

We were kind of disappointed after consistent trips to the service centers, but I said we had spent all these days for ourselves, today we pamper and nourish our bikes. Its bikes’ day today.

Back at our cottage, we had a bath, and went out to find another restaurant, Mushroom. I hoped it didn’t turn out like the last night. Luckily it wasn’t, after a good dinner we relaxed in our verandah where the Russian women kept coming and going out while another old fellow played cards with a younger man, probably his son.

We partially packed our bags readying for the next day, our trip to Thiruvilwamala, JK’s village. We had completed more than 1300 km. in our trip by this point all the way south. From tomorrow onwards it is all North.