Today is our last day when we won’t be burning the rubber. Its rest day today. Nothing much on schedule today except for one thing – Relax and rest. After waking up after 7.30, we get a royal treatment of breakfast, tea, etc. without any walk to a tapri, or a dirty food-stall. JK’s aunt has prepared idlis, chutney and sambaar. Throwing away our awkwardness, I and Manas get into the kitchen. I see a big bowl, full of idlis. JK follows later with Vinu and Sri. The idlis are glowing white, I’m sure Rin, Tide, etc could use these idlis in their commercials. Not just with their appearance, but its taste too was supreme. I’d never had such soft and yummy idlis ever. In Mumbai idlis look and taste murky as its waters. While I enjoyed the countless idlis placed in my plate, Vinu and Sri tussled over the last dollops of the white coconut chutney. Tea followed and the feeling took me back to the bliss experienced few days back at Idli anna’s shack.

Thiruvilwamala, just as its long name, it has a long list of goodies associated to itself. It has its own rivulet flowing through a tributary of Barthapuzzha river, a lovely terrain of hills and plains, a picturesque temple on the top of the hill and the greenery of God’s own country. 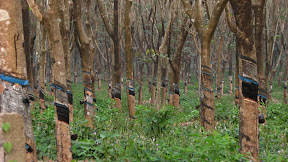 Next on the cards is a swim in the rivulet. We head off with Vinu towards it, and we decide we’ll see the rubber plantation farms where we enjoyed our dinner last day rather fluids should I be precise. The rubber farm, is deserted. JK and Vinu confirming, its already past the latex extraction time which starts from 4am to 8am. However as the loyal tourists we snap some pictures of the trees and the latex rolling mill. 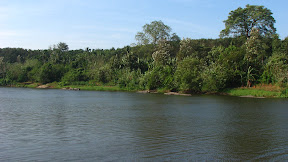 The rivulet has a small dam as well. We park our bikes at one end and walk on the dam crossing the water body to the other side where we could enjoy clearer water. The water is not crystal clear, but little murky however it seems to be clean enough and its cool. A December in Kerala and a swim in a rivulet surrounded by small hills full of trees, rubber plantations, breeze rustling through the leaves carrying the smell of the hills above. I know why villagers yearn for their villages in the harsh life of Mumbai.

Back at the bungalow, a traditional mallu meal awaits. We hog again, and come upstairs in the terrace, switch on the ceiling fan (ya, in Kerala, terraces too have ceilings/covers with electricals) and sit on the खाट having little pain in our hearts, – tomorrow we’re going to leave all this behind.

I and Manas both lay back and idly talk about the route, plan, stoppages for the next day for our trip back to our home. Before we know, our relaxed bodies lower the heart beat, blood pressure and we doze off. Its the first time in our whole trip that we’ve enjoyed the afternoon siesta and what better place could we find for it – JK’s village.

When I got up, JK was still in घोडे बेचके state and remained in that state for another hour. The evening was scheduled, we had to visit JK’s cousin who was getting engaged. It was in Ottapalam, which litereally means One Bridged land. This small town which was about 6-7 km from Thiruvilwamala, was on the northern bank of Barthapuzzha river. Manas and me both miraculously escaped the formal talks and greetings with the elders. JK was quick to take us outside the house, where we were able to breathe freely. 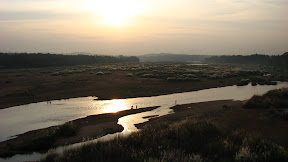 Goodbyes followed the tea, and we were back in the Malabar evening crossing Barthapuzzha. We stopped by the bridge where we had some snaps and then headed back into the hilly Thiruvilwamala. JK’s thirst for herbed lemon water drink – नंनारी – never dies, so be it! After the local refreshment, JK met his cousin sister, Suja, whom he probably persuaded to roam along. JK had promised earlier that we’ll go to the temple in the evening. Not that either of us were interested in the spiritual effect of these structures but the very calming nature these constructions of stone have on the high revving hearts of the bikers.

The temple, I think, if I correctly remember, was of Lord Ram. We encircled the temple, since men weren’t allowed inside in shirts and pants, let alone rugged, dirty jeans with skeletons riding bikes on the tees. The temple had a huge oil lamp wall cloaking the inners. With the oil lamps lit, the orange hue thrusted a magical feel on the surrounding. A tall climb of stairs and back in the temple had made JK thirsty yet again. So on our way back, he had it again – Nannaari. I was too full of that herbed drink while half-tank Manas was interested in purchasing मुंड. JK helped him get a golden lined off-white cloth, the traditional wear of south India, with the colour pattern typical to Kerala. 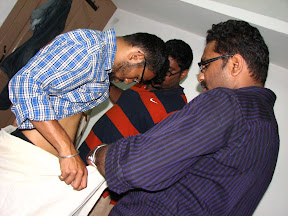 The nite had a party. The new bungalow the occasion. As the tradition goes, the new lords of the dwelling invite the relatives, locals and the builder. The menu primarily has alcohol, with some non vegetarian dish to fill the remaining voids if at all the liquour keeps any. Manas looked at the people in their munds, holding one edge of the cloth with their left hand and a glass in their right. He tried doing it himself, with JK being the lovely maid helping the princess dress up. All that called for few snaps.

Post dinner, we retired back into the darkness, with more than 1300 kms in waiting for the coming days.