Today we are supposed to leave for Munnar. Last day was complete rest for us and the 250km ride doesn’t seem as big a task as first day’s 780km. After some chai, biscuit we hop on our bikes head towards Kerala, our 3rd state in the tour.

Last night we spent an hour to figure out of we should do Munnar. Reason being Manas wanted to be back in Mumbai by Tuesday as he was short of leaves, while me and JK had them overflowing… After a long bout of puzzle in planning and figuring out how to save days, we decided that we’ll roam Munnar on the way, and the next day too we’ll leave in late morning after visiting Munnar’s tea garden / museum.

The down hill ride from Ooty was spell-binding. Trees, smooth down-hill road, cool air of December, the early morning sun rays cutting past through the leaves and not to mention the throttle control in our hands. We came down via Coonoor, another hill station just below Ooty having its own fairy tale railway station. We stopped for snaps at a point where we could see a river down the valley, mountains stacking behind the scenery and the sun finally throwing its golden hue into the picture. 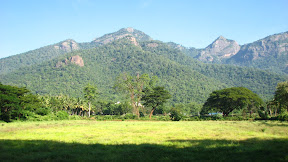 Finally on the flat lands after towering mountains of Nilgiri, Mettupalayam was our next stop for breakfast. However we crossed a huge meadow with the backdrop of the Nilgiris. A photo opportunity we couldn’t miss. Manas wanted to get his Rynox gears marketed and we had some landscape+rynox shooting done as well. 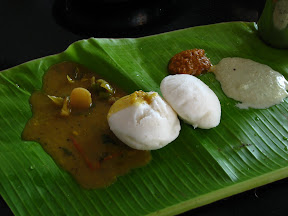 We were all hungry and stopped few minutes ahead where we had our first authentic breakfast of the South India. The idlis were so white, that it could put the AsianPaints co. to shame. We had Pongal as well, which was something of rice-upma / porridge whatever it describes it well. The coffee of south india is something not to be missed as well.

After some rest, we head to Coimbatore through which we had to go past some typical town traffic, which started almost 20km before the city. Coimbatore however has nice scenic points for itself as well. A lovely lake, overlooked by the Nilgiri hills in the distance is sure a favourite amongst young couples.

A ride to Pollachi wasn’t incident free. There were many local bus drivers and one white Indica car which was constantly driving close to our formation. It kept cutting, overtaking us. Manas was so weary about it that he made us stop by the side and asked me to distance myself from the Indica fellow. From Pollachi to Udumalaipettai was a scenic ride. The roads were clean, dust free with trees along the edges. And the best part was there were villages at regular intervals, unlike the Karnataka highways where one hardly can see any. We stopped for a coconut water break, JK started off with Malyali to find the vendor couldn’t understand anything except Tamil. The water was very sweet and the tender coconut even better.

On the right side, we could see huge mountains far away in the haze, I guessed it must be the Munnar hills. Soon we had to take a right for Munnar on the road, which led us through the town, where one young cop stopped us. He asked for identifications, even took down the names, address, etc. I asked him how far Munnar could be from here, this was what he replied.

I’m sure this fellow had never ever travelled, let alone on the mountain ranges. 80km doesn’t take 1 hour even on flat roads in India, the hilly terrain will add more than 3 hours. Later we’d learn that he was one of “10-rupees” cops of Tamilnadu.

Quickly, a national park followed, not as beautiful or well maintained as the Bandipur, but a national park none the less – Indira Gandhi National Park. The speed reducing to about 30kmph. thanks to the potholed interiors of the road. This was the Tamilnadu border, and we soon came across a checkpost – Chinar Wildlife Sanctuary, Kerla’s name for the wild reserve. A cop made us stop by the side and called us for logging our names, vehicles in the register. While at that, one of the localites pointed to us and then to our bikes. A macaque was unzipping Manas’ tank bag and trying to find food inside. Manas and I quickly ran to shoo it away. But it was wildlife-sanctuary. He budged only little on the tree and stood his ground. We had to stand by the bikes to ensure that the primate didn’t return back.

The road in Chinar was marginally better than in previous state. Slowly and steadily we started moving up the terrain into the 4000 ft. altitude range. Munnar is at the altitude of 5500 ft. We had to climb a lot from the plains of Udumalipettai. It was getting close to 2pm. and we still didn’t have our lunch.

Finally the reserve area vanished with more settlements, resort like buildings appearing alongside the road. We decided to break for lunch. When we finally did it was Marayoor, it was almost 3. We stopped by a traditional eatery, just along the edge of the hill. It was clean, but the only food that we had was rice, rassam, and more traditional stuff. After having a stomach filling rice, while gearing up, I muttered …

JK, साला ! You know whats the best part of the restaurant ?

It has a better view than any place in Mumbai. The toilet’s ventilation looks over a green meadow below which is caressed by huge hills of on 3 sides ! Damn ! I was lucky to go to the toilet !

Munnar was still 40km away, and we decided we’ll stop at Anamudi peak. But the restaurant owner said that u’ll need a pass for it and they only give it to the foreigners. So we decided to roam along and enjoy whatever we could. As we started on the undulating roads ahead of Marayoor, I observed that either side of the road was heavily fenced, like protecting something. All I could see beyond the fence were trees ! Not even wildlife. I pondered. It was only a signboard that cleared my mind, it was Sandalwood reserve. Sandalwood tree is heavily protected species, the sandalwood itself not available freely in the open market. I thought I might be able to sniff the air of it, but either my nose is not that strong or the air doesn’t smell of sandalwood in its reserve 😛 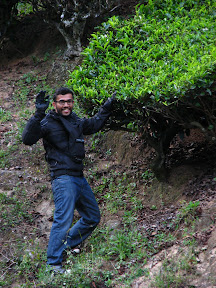 Slowly the trees gave way to shrubby bushes, which seemed to grow only about 4 feet in height, Tea. Then all where are eyes could focus was full of tea plantations. We stopped by a point for snaps. We halted again, when the tea was actually just by the side of the road where Manas couldn’t miss the opportunity for his FB profile picture.

On our way, we came across Lakkom Water Falls, where there was a ticket of ₹ 5. The wall was beautiful but not as great with respect to the surrounding scenery of tea-hills and deep valleys. As usual we managed to disturb some honeymooners.

Munnar town as in my memory was crowded. The heart of town bustling with tourists, vehicles, buses. None of us wanted to rent a stay in this area, so we ventured ahead through the traffic. We met a guy who gave us a card and asked us to call for rooms. After our unsuccessful search of which one hotel had a room rent of ₹ 1,500 a night we decided that we should call that fellow. He took us back in the hill above the town, into a shanties. His “room” was way too far away from the parking lot, so we decided to go back into the town looking for more. Luckily on our way found a small ground-floor lodge with parking right in the front! Thats it! It was one of our most difficult searches for a hotel – but that too just took at max. an hour or so.

After refreshing ourselves, we headed into the cooler night (not as cool as Ooty) for dinner, with JK setting his eyes on Chicken Chettinad while I was happy with some plain yellow dal and rice and rotis.

One thought on “Kerala Bike Trip: Day 4: to Munnar”