Its past 5.30am and we’re waiting at the Panvel junction watching guys in dark extorting  from truck drivers. JK isn’t here and not even responding. He calls back saying he is locked in traffic. He finally makes at the rendezvous point with 2 of his bags stacked over each other on the pillion seat. Manas’s first statement after a gaali for being late is

JK agrees, he said he thought it was hoisted and was almost like a full-back-rest, but now its kinda dangling and unstable. Its already past 6, JK is more than 30 mins late, and we can’t even start without fixing JK’s bags. Manas with his endless resources of bungee cables, ideas of hoisting bags on a bike gets through with the problem and JK’s bags are now bomb-proof. Still as a dead person. We finally leave by 6.30am, already an hour late, which we’d rue later.

NH4, Mumbai – Pune has been taken a thousand times, stopping at the typical junctions / views, but not this time. Near Khandala, JK’s bag is giving trouble yet again. Another 15mins for it. It seems JK’s bags are winning “Object of the Day” shield. Post fixing, we throw are bikes in the highest gear possible and cruise over 90kmph going past Pune.

We finally stop near Shirval. I missed McDonald’s and now we’ll have to do with a normal dhabba / restaurant. This one is just next to the highway. Its cool and the sun is shinning warm. We decided to sit outside in the sun.

After a typical Upma, idli-vada breakfast, we move on with Satara, Karad, Kolhapur in sight. It seems almost noon, and my bike is showing a little less than half of fuel in the tank. We’ve also come into Kolhapur. We stop for a fuel stop and decide we should have lunch as well. We ride a little ahead spotting another McDonald’s which we can’t get ’cause its on the other side of the highway.

Satara – Kolhapur – Kagal (NH4) division has been converted into a 4 lane highway with most of the stretches concreted. This however leaves a very boring journey for typical bikers since they hardly find winding turns, up and down hill routes, etc. However what it did leave for us were the black soil rich sugarcane farms. Acres of them. Almost after Pune, all that we saw was sugarcane, paddy, sugarcane and sometimes some maize crop. So much sugarcane also meant that we crossed many breweries, with their sweet smelling crosswinds getting sheared with a fermenting molasses gases and later into a jaggery like taste in the air.

We travelled as we had no stomachs to feed, soon we had crossed the Maharashtra border, almost 8 hrs into the ride and one state conquered. The first thing I noticed after crossing the border was, no traffic on the road. Almost as soon as we crossed Kagal, the bordered town in Maharashtra, the truck traffic almost reduced to a tenth of that in Maharashtra. The private vehicle traffic less than a half. But the road continued to be wide and strong. The adjoining scenery still landscaped with the sugarcanes.

We stopped for a photo of a hill surrounded by nothing but plain brown land. 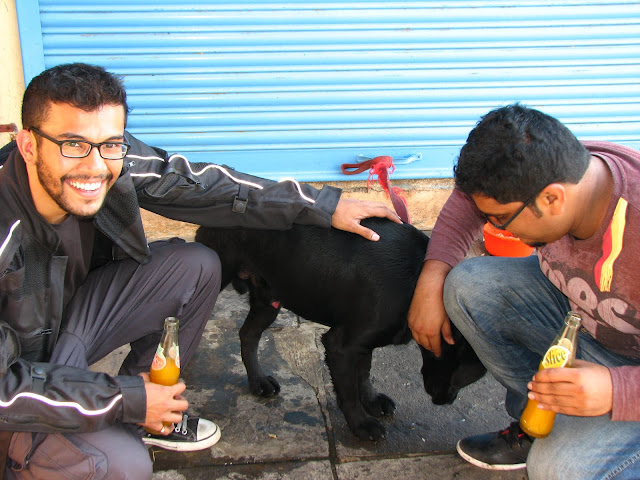 JK cried, and we decided we’ll stop at the closest dhaba / restaurant. We did at Hotel Rashmi which was just close to Nipani. We had already done more than 400km ! Our destination for the day was Hubli. After resting a while watching India lose to England in the test match, we enjoyed our first encounter with the dog, a 10 month old black Labrador.

Resisting the urge to rest more, we put our bikes back on the tarmac. Riding.. getting bored.. The scenery didn’t change a lot, as opposed to NH 17 (Mumbai – Goa), the NH-4 is so damn boring. Soon just before Belgaum, the traffic reduced further, now we hardly saw a private vehicle in 5 mins or so. The road still wide, it was here I felt a strong need for a stronger bike, 250cc+ and the images of CB500X started to cross my mind again.

Area near Belgaum was beautiful, we crossed small cut hillocks, which in their cross section represented layers of stacked slabs of rocks, inclining, giving into the pressure breaking at points, the red-rocked layering was a picturesque moment to grab, but we couldn’t afford that time cut. Far in the distance we saw a hillock with one wide building. From the distance it could’ve been as big as the Presidential house, I thought it might’ve been one of the palaces of Karnataka. As we passed by the building, I saw the “Ashok Chakra” ! And just like me everybody was amazed at the size of the building, I couldn’t see any names, signposts related to it – All I could see a huge structure commanding respect over the local flat land.

The wide roads continued, Karnataka’s NH is a scary place for riders, there is almost no town / village after every few km like in Maharashtra. If you get caught with some problem, then you have nothing 25km ahead of you or 25km behind you. Its that bad !

We reached near Hubli, the sun was close to 5pm strength. In december it means less than 1.5 hrs of sunlight in this part of the world. Almost 500km on the trip meter. Manas suggested that we should ride further, since the next day it was 500km through State highways and crossing the mountains to climb Ooty. We all agreed and decided we should halt at Chitradurga.

As we rode as past Toll posts, the intensity of the scattered natural light had dwindled past our comfort and our headlights were guiding and keeping us safe. We stopped at a petrol pump for fuel, where we enquired about Davangere and Chitradurga. In his broken Hindi trickling past the Kannad, the guy managed to tell us that we still had about 80km+ to go.

The dark highways are a completely different set of beasts. The same highway where we did top cruising around 95kmph, we had reduced to less than 70kmph. With the bright high beams from the other side, the uncertainty of the road condition, all making it difficult and very strenuous.

In all the dark and cold night of Karnataka we reached past Davangere town, which was like few thousand bulbs glowing around the highway. Chitradurga was still about 75km away. We stopped for water+dhaar break.

was JK’s grumbling.. I replied…

this analogy of Mumbai’s distances continued, Borivali – Andheri and so on… I was leading and the only way I could distinguish JK and Manas’ bikes was looking out for Manas’ bluish tinged LED pilot light with a strong 35W headlight and a goatee-piloted FZ-S between us.

We finally reached an odometer reading in my bike, where it should’ve been Chitradurga city. We stopped by a junction, looked around, on the right we could see an inviting green sign board on top of the road – “Welcome to the city of Forts – Chitradurga” ! What a fuckin relief ! We decided to cut through the NH and head towards it. Just after crossing it, we found a hotel / lodging – Aastha or Avistha delux, I don’t remember.

For ₹ 800 a night it was OK. The commode was little unclean, the lodging guy blamed it n the hardwater. We were too tired to find another one and we threw our bags inside, and headed straight for an adjoining bar for dinner. The bar was a typical one (for Karnataka), with small rooms covered with dirty red cloth. We selected on which we thought was cleanest only to see red spitting in the corners and insects having a meal on our skins. But it was still relaxing !

It was the only thing that was keeping me awake and focused. I had stopped realizing that my ass to had senses. It was that numb.

Came back to the room, I was too tired for even having a bath, all of us slept in the same riding clothes. The alarm was set to 5am ! Damn!

It didn’t even take us a minute to deep dive into the sleep.