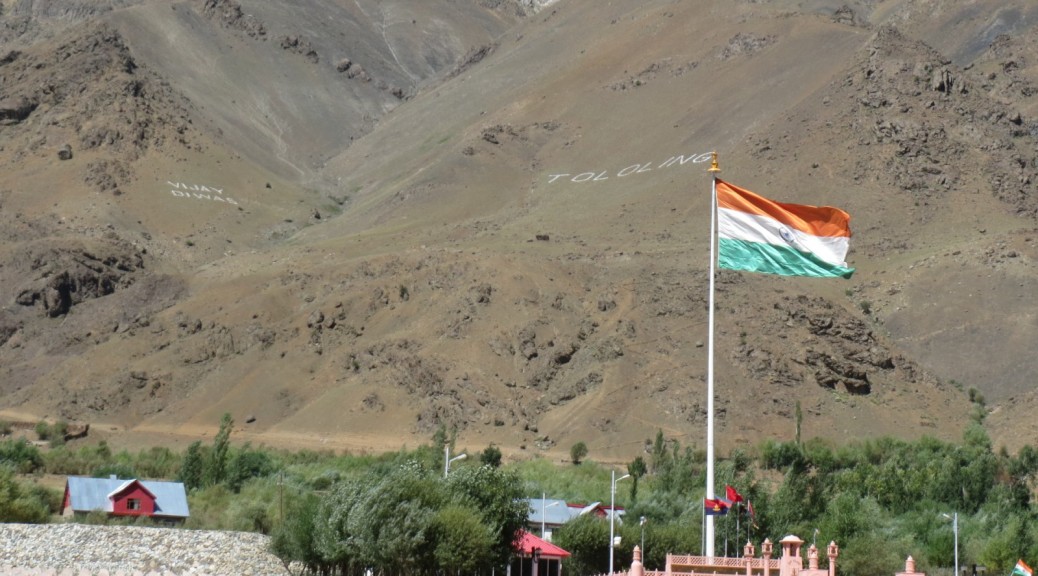 … the broker kept intervening our bargaining with the cab driver/owner for the Srinagar-Leh trip. “the owners” was a hint for us to not demean the guy since he was the owner of the cab and not just a rented driver. Finally the deal was set for ₹12K for Toyota Innova with an overnight halt at Kargil. Post the bargain another fellow followed us for a shikara ride, Mr. Young Noor Mohd. The “Young” in the name not different from the English one. However the shikara fellow was well in his late 50s, a slim short, with creases on his forehead typical of a hardworking labourer in the high altitude villages and towns of Himalayas. The shikara moved along the weed infected Dal lake of Srinagar into the thin pleasantly cold air, the surrounding mountains, hills overlooked the valley with a parental care. Next day we had to cross these parental protection and get into the harder terrain, where the altitude changed so dramatically that even the grass, let alone the trees and plants ceded to grow.

Next day as the Innova rolled through the winding turns of Srinagar’s streets dotted with Army jawans, the ever so beautiful Poplar trees on the sides bore a perfect foreground for  the picturesque backdrop of the Deodar, Cinar, Birch trees hills. The hills completely covered by the silk green velvet grass. Indus / Sindhu welcomed us for a tea stop near Wayul. The blue-green-gray cold water flowing downhill right from Leh, our destination. The gray pebbles, rather almost white  teasing Indus to play along its journey to Pakistan.

En-route was Sonamarg, almost 2 hours from  Srinagar, The ‘meadow of gold’ has green hills, with trees only on the higher reaches of the mountains. A breakfast of paratha and Kashmiri-roti – which resembles Tandoori-roti (although smaller and thicker) and tastes halfway between tandoori-roti and a Naan. The driver, Mr. Javed Mohd. had a नंकीन चाय or Kashmiri tea, a pink colored pungent liquid made out of milk, black salt and other spices.

Further ahead we moved past the start of the route to Amarnath Shrine. Soon, we were at the dreadful Zojila or the Zoji Pass. A rocky pass with white sand and rocks. The road eroded to the basics, with just rocks, sand and grains collaborating to form a partially forming a road. Horizontal, climbing, lose with rocks and pebbles and extremely dusty. The width of the road at times only wide enough to accommodate a single vehicle. If trucks came from opposite direction, either of them had to reverse on that terrain to get back where little more land was available to ply. The green, silky mountains had changed into a completely rocky feature with only hints of Our driver showed us the “India Gate” a vertical column of stone on the right. This marks the start or the end of the rocky pass. After we were in a partially tarred road on a flatter ground, but yet overlooking the rocky intimidating mountains. A big sign over the road welcomed us at Zojila (Alitude: 3517m) and into Ladakh.

Ladakh means the “land of high passes” in the local Ladakhi or Bhoti language. “La” means a pass, so Zojila is “Zoji Pass”. The name very evident for the traveller in Ladakh. No ride / drive longer than 20km misses a high pass watched over by sometimes soulful other times angry rocky hills.

Another 2 hours of drive led us through more barren land and mounts into the war zone, Dras. Javed stopped for lunch and showed us the Tiger Hill a taller and distinguishable conical feature amongst 100s of other rocky cliffs. A small board invited us into the second coldest inhabited place, Dras. Post lunch the stop was at Kargil war memorial not very far away from Dras. A typical military curated, paved, marked, beautified roads led us to the memorial. Where a jawan asked us to walk through the “विजय पथ” and assemble at the briefing point. Here he gave a 15-min long briefing about the war and the memorial, shouting loud into the cold breezy open desert. For many even walking along was a arduous task, this guy continued with dedication and thick voice emitted right from the depths of the stomach.

Kargil town was just an hour from that place. We found a hotel and went to see PoK (atleast thats what we thought). However we were taken higher into another local hill, climbing for almost 30min to a place called Hundarman. Where the driver stopped and pointed us to a far off village with just over 15-20 huts.

A small river flowed through the base of the hills, further north, the river divided the countries. The village was around 2-3 km away from that place. The climbing road too had signs of “Warning: mines ahead” which ensured atleast local tourists didn’t get too nosy. The road continued even further up into the mountain where there were few Indian families living and primarily occupied by bunkers of Indian Army.

We experienced the treacherous conditions in which the Indian army is functioning. Where every single step is an effort for the common man, the jawan parades, runs, climbs and kills.

One thought on “Leh Ladakh Trip: To Dras, Kargil”