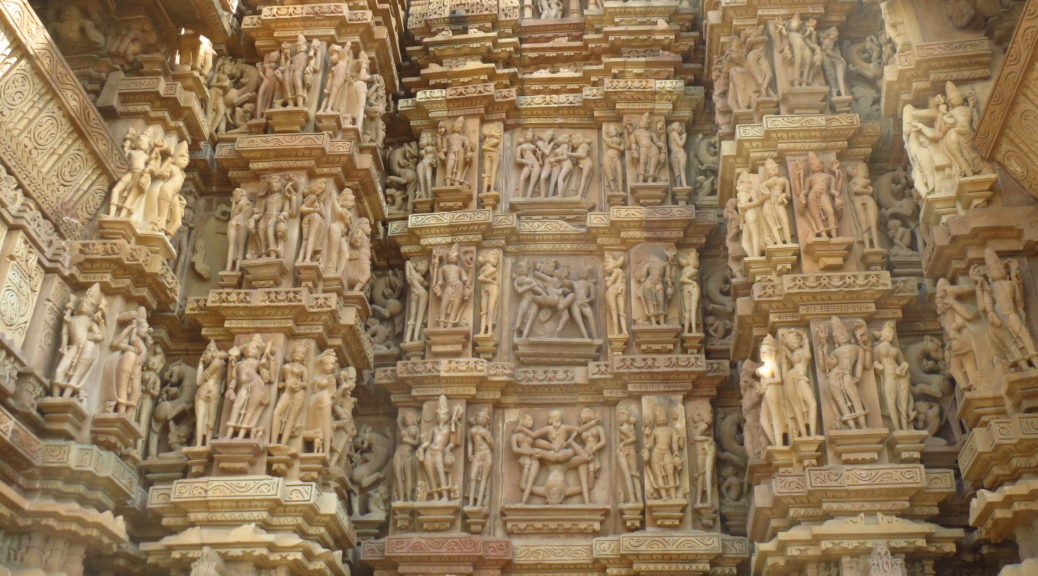 Was the call of the tea vendor as the 3-Tier-AC Punjab Mail coach raced into central India. Cousins all converging at single birth where there was something happening. Either it was awesome crisp chakalis and chirotes made by our aunts or a game of dumb charades. 6 kids accompanying us ensured there was never a dull moment, either it was constant shrieking with the excitement of the moving train and jungle-jim designed bunk beds or their cries in an event of a fall or an unfortunate squabble. It was a surprise to my colleagues when I told them I have a big family gathering at temples of Khajuraho !

In the central plains of India, April is a sweltering period. The day time temperatures reaching upto 42°C ! The land seems already parched. The arid soil is not the most fertile, but it yet breeds a host of vegetation. Amongst those, a specific tree stands out tall, literally!

The Mahua tree is high standing structure. At times tall as 20m. Its shape sometimes resembles an afro. The branches almost having a mathematical progression. The tier-1 branches shooting off radially around 7feet high from the ground. From those sprout the 2nd tier of branches that rise almost vertically. The next set of off-springs again spreading horizontally. April makes the tree leaves almost maroon in color. Start of the summer is time to bear flowers, the infamous Mahua flowers!

The Mahua flowers are small, bulbous almost a thumb’s width. The petals however have a strong character. They are thick, light green and hold a fragrant musky odor with sweet fluid. The flower is edible. The smell reminiscent of tender coconut. The flower is used for making sweets and even alcohol. The cattle seem to be extremely fond of this delicious flower. Before we could be enthralled with the sculptures of Khajuraho, we had planned a safari at the Panna Tiger reserve. Entrance is difficult, with chaotic checks of the rosters, entry passes and guards. The tiger reserve like any other forest bore a serene demeanor. Even during the hot month, early 6am was pleasantly cool. The first sightings of the animals were the deers, Sambar and spotted deer (chittal). The black faced hanuman langoor perched at the edge of the road held almost a day old baby clinging close to the mother.

Tigers are elusive and shy, however the spotters always find pug marks. We found a few, where the trackers had placed rocks along side the marks. It seemed like juvenile male tiger as the guide thought. That was the last and closest we came to the big cat.

We passed along the Ken river, “The cleanest of all the rivers in India” as our guide put it. The river runs northwards and drains into Yamuna. Its also the home of Indian freshwater crocodile or the Muggur crocodile. We did have a glimpse of one swimming in the distance, with just its snout visible along with the trail of the water. Through the hills we drove in the 4×4 Gypsy surrounded by mostly Sagwan trees with its big leaves now almost withered by this time of the year. We stopped at a scenic spot, above the river when a young Sambar female came up the gorge right next to us. It was followed by an even younger one. Both of them almost posing for the cameras.

The second day was reserved for the highlight of the tour, the shrines. Below the north-central heartland plains of India ruled the Chandela dynasty in the hilly terrain now called Bundelkhand. The western group of temples are dotted at the periphery of large lawns. We attended the light and sound show by the late evening. Lighting and highlighting the famous temples. It began with a voice and a story, a story told in an extremely well choreographed manner with light and heavy soothing voice of the narrator. Through the story, random areas of trees were lighted and bathed in sounds of the narrative. As the story moved towards the creations of the temples, the originally light parts of temples glowed differently revealing the majestic splendor. Even a temple visit had to be an early morning one, unless we wanted to bake ourselves. We hired a guide for a whopping ₹1900 (for the entire tour, the eastern and the western group). Our first visit was to the western group of temples, the stronger ones and with more character.  Rolling us through the stories of Varah, the Chandelas, Vishnu, other gods, demi-gods and devils alike. The guide cast a tight web of neatly linked story. A story that also kept relevance to the temple and its facade that he kept referring and pointing towards using a mirror and a beam of light.

The Laxmana temple was the most regal of all and perhaps the biggest as well. It perhaps could’ve had more than 1000 sculptures on its face. From mythological cupids, damsels to Gods to mortal humans in their daily grind of life. The vanity aspect of श्रूंगार (personal make-up and beauty) having more focus. The sculptures typical pose of a couple in the आलिंगम् (sideways embrace with female’s right hand on the shoulder of the male and male’s left hand on her breast) was most common. It had figures of women wearing makeup like mascara or stretching in their beautiful curvy figures. Some of the sculptures turned into the infamous positions and stances of enjoying sex. The entire trip around the western group did turn out to be exhausting. Some of us were more interested in the menu on the breakfast buffet at the hotel than the historical mark of beauty in front of us.

Back at the hotel during daytime was laid back, Everyone wanted to cram up into a single room and even wondered if a dormitory would’ve been an excellent option. With all the cousins, sis-in-laws back from Khajuraho’s temples, giggles were relentless.

“How indecent !!” yet laughs followed. During one narration by our temple guide an aunt and another set of cousins couldn’t control their laughter – thanks to the heavy tongue of the guide and the unmentionables ! – They just burst out right in front of his emotion-less poker face of the guide. Poor guy, probably has to go through the same every single day. The lack of a dorm wasn’t good enough to deter us from finding a common gathering spot. Somebody found out gymnasium with a neat AC running and clean carpeted indoors. We just settled in there. Some just enjoying a cool pleasant walk on the treadmill while most of us going through rounds of UNO card game and other card games.

The evenings too didn’t go without collaborative fun. It was the pool where 3 generations of the family swum enjoying a cool water after the hot summer day. Aunts, uncles were the one who swum with their grand-kids who at times were shit scared of the water, but now accustomed to it, just like us – the 2nd generation. Someone even played songs by “Maroon V” that made it even more enjoyable.

After a sweets laden dinner, most of the seniors and 3rd gen along with their 2nd gen headed back to the soft comforts of the bed. While other set of the 2nd gen who could afford it, ventured out again in the open lawns, under the Mahua trees with their musky fragrances, remembering events of their lives. I went through the horror stories of my burns to the intoxicating tours on my cycle and motorcycle alike. When exhaustion ran over, most of them headed back to the rooms. While some strong willed continued the narratives, stories and UNO games into the rooms. With my sister lying next to me, doused with sleep, yet listening to anecdotes and movie dialogs by cousins, it was hell of a moment !! Times that would stay long imprinted in our memories.

Leaving back was never going to be easy. The kids loved every moment, specially now with the nuclear families – kids are used to more secluded lifestyle and not really pampered with love of multiple aunts, uncles and grandparents. As well – they had to deal with their  situations by themselves as their parents weren’t always there to interfere.

For us too, the large family gathering seemed like a huge success. Amidst ups and downs of our roller-coaster lives, the Mahua tree stood tall with some leaves withered while fresh new tender red ones slowing gelling in to make the tree stronger. Undeterred, deeply rooted looking ahead into the future.

One thought on “Khajuraho trip”