With no treks in monsoon, one was due, Rajoba planned for this relatively simple trek to Kothaligad for 11 September 2010. We were to meet @ Dadar’s ticket-window spot around 4.40am and board a train for Karjat around 4.58am.

For the first time all made it on time, I was happy. But Vj was still worried, Hanjoo, the President of my ex-company was yet to make it. Rest all of us, Vj, his wife, Deepak Airy, Vijay Gupta, Anshul Pandey, Digvijay Singh, Amol Rajoba were present. Manas couldn’t make it as he was late to get up. Me and Vj ran to get Hanjoo @ the cab junction, while others moved for the platform. When we reached back @ the platform, the train had already left, and the next one was at 5.37am. So we called Manas and checked if he could still make it. He did without a “cleanup” !
At Karjat station, we grabbed a ST bus for the Ambivali village. This was the base, from where our trek was to start. 1.5hrs ride to Ambivali village with everybody managing to catch hold of some sleep. We started our journey from there to the base of the pinnacle, the Peth village. This was about another 1 hrs walk, climb through a very rocky road.

The climb/walk was more of fun, as everybody with their respective stamina, and passion for photography, or should I say for Orkut-ology or newly Facebook-ology were trailing behind. Hanjoo the eldest of us, was quick. We navigated through most of the shortcuts, cutting straight through winding roads and take you up earlier, but not without extra-climbing. We split in 2 groups (naturally) with quicker and the slower. The quicker moved around the green meadows waiting for their compatriots, while the compatriots reached the Peth village! 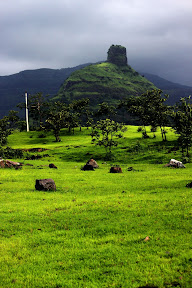 At the Peth village we had a few refreshments, a cold drink bottle costing almost 1.5 times that of the MRP! There we hired a kid to take us to the pinnacle, where there were caves. Another 1 hr climb, this time really a climb, no walk! we reached the caves with relatively clean area. The गांववाले must be keeping it clean. But the other parts of the cave were stinking with Bats! so horrible the smell was that we could hardly breathe. We decided that we would have our food/lunch over here. Vj and his wife started pulling out the ‘Wax Stove’ and Maggi noodles, while others helped in getting water, arranging Newspapers to sit. Hanjoo was restless.. didn’t know what to do. The kid, Anil, said there were 100 steps that lead from the cave to the top of the pinnacle. Hanjoo said, “I’ll be back” and started climbing, while I kept asking the kid if there was any place where I could swim or have bath with good clean water. After checking a few cisterns infested with toads, frogs, rats, etc. I dropped my plan. I decided I too must go through the inner-carved steps out into the open. Each step was about 1.5 feet tall, almost reaching the knee, after some panting I was there! Open ! Hanjoo was checking out the beautiful Sahyadri. It wasn’t very windy out there, I decided I need to remove my Tshirt, others who had followed me to the top too copied … few of us without our T-shirts with our President! shirtless! enjoyed the breeze which teased us.

After a small thought of Manas, Hanjoo that beer should’ve been a great companion @ the top, we moved down having our staple trek food of Bread, butter, cheese slices and the Hot Maggi. Around 3 we started our descent from the caves and reached to the base of Peth in 30 mins. From there one the climb down was little boring as it was a rocky road. Around 5 all were there at the base near the bus stop. We waited near a “Hotel” few had tea. I enquired if there was a hand pump or something where we could clean ourselves, A villager said there was a big pond of fresh water, but if we made to it, we would lose our bus ride back to Karjat. Plan dropped! 🙁

The bus arrived around 5.30 pm, and we reached Karjat around 6.40pm. Manas the only guy without a return ticket had to run as there was a Fast train already waiting to release its brakes. We just managed to grab it and reached Dadar around 8.30pm. Home sweet home was by 8.45pm.