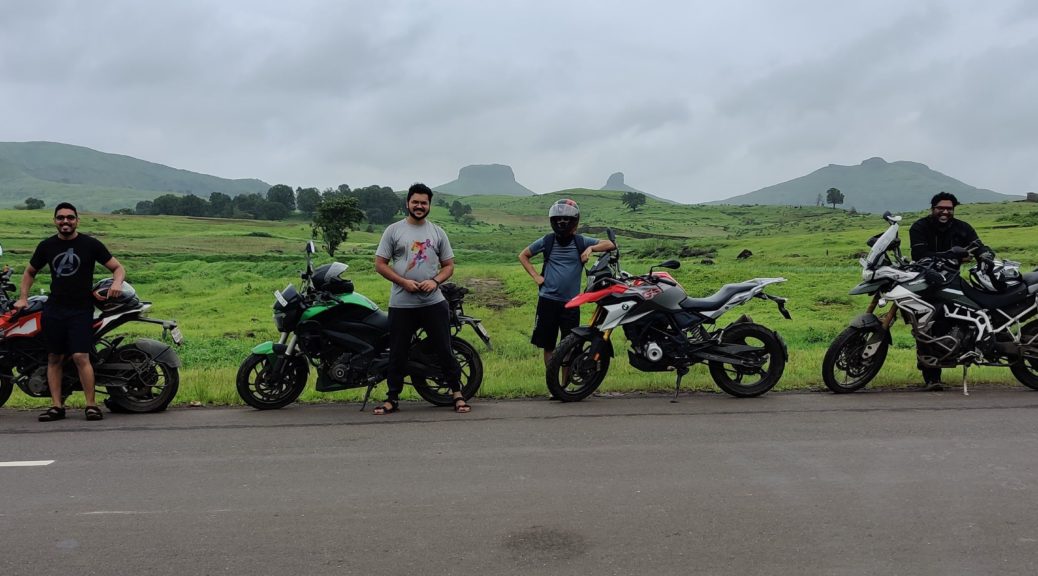 So the quest began for a route, and as usual the eyes always get stuck on the blue amongst the outer reaches of Mumbai. A straight line on a blue body came up slightly north-east of Igatpuri, The Waki dam. Looking around, the ever elusive Upper Vaitarna gave the sly. It turned out to be a fairly long 330 km. ride.

The early morning started with rains, damn ! Luckily by the time we hit roads it was dry. At the Vakola junction, across the road I saw burly guy with a big bike and a bigger top box, it had to be JK. With his newly wed lady, the Tiger 900 Rally Pro! Up ahead we met with the Kanjurkars and soon we were blasting on NH3 till… ofcourse the Bhiwandi – Kalyan morning traffic caught us.

Post Kalyan, it was faster and the stomachs too seemed to have dried up making us have the Asangaon pit stop at the food mall. There on, nearing Kasara the rains welcomed, I was having no protection unlike some and we continued to ride through the recently land-slided Kasara ghats reaching Igatpuri in hard hitting heavy rains.

Drenched completely and cold, at the Khambale junction we stopped for tea. And immediately ahead the scenery changed, rains stopped, roads, vehicles, noises dropping away for paddy greenery, lush wet earth and winding roads navigating through sleepy huts. Around, far away in the distance the hazy blue-green hills around igatpuri gave a grand-canyon-ish look with random tall columns, cones and plateaus. Of-course, the silly bike photos with hills and greens in background coursed its way through phones.

At the Waki dam, spent a good time doing nothing, like kids just throwing stones in water and trash talking. The water was little muddy and along with the “no entry” sign boards which most people didn’t heed to – deterred me for a swim.

Ahead, was very well paved tar roads, unexpectedly good for the “white” thin lines on Google maps are associated with. It was taking ahead to the Upper Vaitarna, the biggest catchment for Mumbai’s water reserves. Had another no-focal-non-directional timeout at the “Ram Setu bridge” dividing the reservoir in two. There on with some Nick’s videography we moved towards the Khodala village after which the route and luck was to turn southwards towards Vihigaon completing the loop.

We waddled on our bikes, enjoying the hilly roads reminding me of Ratanagiri’s green hills. Things soon were to get sour. The ideal tour was converted to a realistic adventure when I hit a calf in a group of cattle who abruptly came into my bike. I was probably 20kmph and had to let go of the bike crashing down! Strike-one Luckily I was unhurt but that wasn’t the case with the bike. Got it upright tried starting the engine – luckily it whirred to life. But the handle was slightly out of shape, I had no option to hobble back on the bike back to Mumbai riding one shoulder dropped like “Vijay Dinanath Chauhan”.

Near Vihigaon, my mood wasn’t great to discover more near the waterfalls, so we headed on to Kasara ghat where we had to climb almost 60% of the ghat again towards Igatpuri as its a one-way. A U-turn on the plateau and back for Mumbai we stopped somewhere before Shirol at Hotel Vrindavan for lunch. It was 3.45pm. A quick dash of simple paneer-mutter, daal and rotis was good enough to get us back on the saddles for the last pitch to Mumbai.

The day wasn’t yet over for me, at home while I was inspecting the parked bike, I managed to topple it over my car ! 2nd fall of the day for the bike Strike-two and injuring my car as well Strike-three – Out! Perfect! A day well spent, literally ! BC 😡