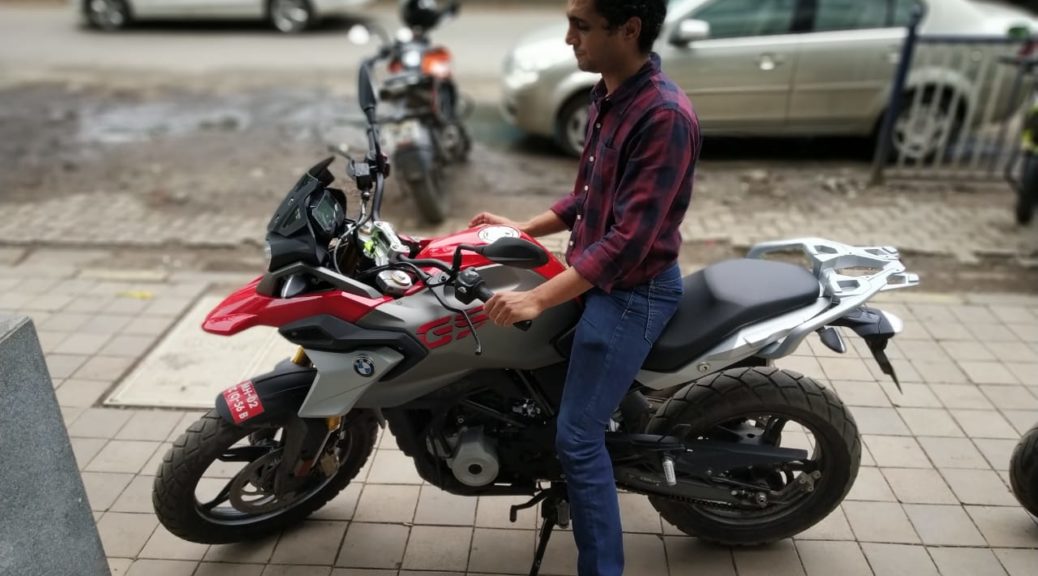 I had waited for BMW 310 GS (the baby) for over a year. Yet, even after 18th July 2018 launch, the test ride schedule stalled, thanks to the heavy rains of mid July in Mumbai. But finally yesterday, 25th July, the moment arrived and I was at the showroom for the test drive. Me and few more colleagues eager to get into a BMW showroom rode to the Andheri showroom. I rode a colleague’s Hornet and another Duke 250 followed. We gawked and drooled at the massive vehicles.

On the first look, the bike does look big. It kind of reminded me of KTM 390 Duke 2017 edition when I saw it first in the showroom, however this still felt bigger. The front fairing around the tank is very GS-resembling, very typical of the Adventure bike segment with the trademark design of its beak. The Big BMW badge on the fairing is a pleasant decoration 🙂 The seat was wide enough and soft followed by a H U G E rear top-box rack, big enough for a kid to sit as a 2nd pillion (please don’t do that). The engine area houses the famous reverse-inclined 313cc cylinder, in the front it has a massive radiator and its mounted high. The switch gear was impressive, felt like it could stand an apocalypse. Big, chunky, strong plastic buttons. They weren’t the usual glossy ones, but rather a toned down matt-finished. ones. The windscreen / deflector seemed small very atypical of its segment, ie. I had test-ridden the Versys 650, which has a big one. The golden upside-down forks too look they could take any beating as opposed to typical commuter bikes. Tires are massive, specially my first encounter with that 19′ front.

The test vehicle was on a ride and we had to wait. Till then we roamed staring at the machines costing well over ₹20 lacs. One of the colleagues asked about that big box that came out of the R NineT Scrambler.

We laughed and I whispered in his ears, “it’s the boxer engine. If you continue with these silly questions, we’ll be pushed out of the showroom and my booking amount too would be returned.”

Thankfully that didn’t happen and we checked the Papa GS, 1200 GS and were amazed by its size. The tallest (5’11”) and strongest (85kg+) of our lads, DevD too looked small in front of it. Goofing around continued…

.. till luckily for the showroom owners, the test bike arrived and we headed out of the showroom.

First Hop and the ride

The bike was parked on the footpath, yes, this is INDIA! In the front buses, cars, motorbikes, cycles plied along with the divider for metro construction. Total chaos.

The test ride was the one that I had booked, Red one, officially – Racing Red. A guy handed me the keys and I put those in and hopped over.

I skipped a heartbeat as I hopped over. The bike was parked on a slight incline. And after hopping my legs barely reached the ground (I’m 5’7″), and with my inertia, the bike too moved sideways on the right and I thought I was gonna drop it! Luckily, the bike wasn’t a 200kg behemoth but no humming-bird either. Somehow I manged to strangle the drop. First lesson…

DON’T EXPECT TO RIDE A Hornet or Unicorn!

DevD too was taking a test ride with G 310 R, the showroom guy took the Duke 250 to ride along with us or rather to keep a watchful eye. The clutch was light enough, didn’t really expect it to be as soft as the Japanese commuters. I pushed the Start switch and nothing happened, I checked the key, its position was fine, tried again… Nothing.. I was about to call the showroom guy before मेरी इज़्जत was saved. I gave a look at the starter switch and observed the Ignition kill switch, which was in OFF state, duh! Again, it’s not a commuter Honda bike with no kill switch. 3rd time… and bbrrummm…..

I revved the engine and it was happy to cross over 6K RPM with one twist of the wrist, the sound was stronger from the engine compartment, from the riding position I could barely listen to the exhaust note. I was probably expecting a bassy note like 4-cylinder, but…

Kandya, another colleague sat as a pillion behind me, DevD on the 310 R for his test ride. I shifted to the first gear released the clutch and… brrrpppp.. ! Stalled ! Again… stalled ! Me and Kandya gave out a big laugh, he asked…

I got the knack of getting the 310 in motion and just few meters and I had to stop it again, thanks to the traffic. The showroom fellow was ahead, I screamed asked him how does BMW compare to the Duke? He put the bike on the side-stand, switched off the engine, pulled the key and walked to me and started blabbering… (THUG LIFE ! 😎)

I kept worrying about the traffic, what if it moved, but that didn’t happen for the next few mins, and every passing minute made me realize again, its not a commuter. Remember the high-mounted radiator I spoke about, the heat was blasting. After a minute in the traffic, Kandya my pillion said, he thought only he got the hot draft. The heat was probably on par with a KTM Duke. I had test ridden Versys 650, which I felt was much better at heat management. But then I rode it only in the showroom complex, not in the real life with buses and cars around to bounce off the heat.

We took a U-turn and the bike just zipped passed the rickshaws, the cars and the Activas. The gear box seemed OK. The vibrations weren’t huge, but probably along the lines of Duke 390. Definitely not the smoothie like my Honda Unicorn. The roar of the engine, though subtle, did make some clearing for us on the road. The traffic caught up with us and an uncle got speaking with the 310R rider about its price, probably ubiquitous कितना देती है. I couldn’t see the USD Forks work, but my bum did feel that the forks with the cushy seat did a wonderful job at the office. The yank of the throttle wasn’t panic creating as it’s in a Duke 390, much easier over here.

The ride finished off with almost 15mins on the road but 5min+ staying put in the traffic. The U-turn was light enough didn’t feel any weight of the bike, yes, it did feel big though. Cautiously, I treaded on the footpath to park the bike (sorry!) and almost hopped to get off it. I’ll probably get better at Kung-fu kicks with mounting and unmounting on this one. I sat on the 310R which was definitely lower and probably easier to maneuver. DevD who test rode it mentioned that when he took turns on it, the bike stayed tilted unlike the Duke which kinda resisted to stay down but wanted to sit upright, perhaps a lower GC was working its physics on the R.

On my way back, the Hornet’s wide handle and stance felt puny, but the easier on the legs heat was a welcome relief. The 310GS is definitely a bike to take on long open country roads or without. It has a character and swagger that would have eyeballs transfixed.

Summary (Score out of 5)